This announcement brings the POWER7+ processor advantages of higher clock speeds and built-in cryptographic and memory compression accelerators to the Express (low end) Power Systems products. The announcements today include POWER7+ versions of the Power 710, Power 720, Power 730 and Power 740 Express servers, a completely revamped Power 750 Express server. There is also a new entry to the Power Systems mid-range product line,  the IBM Power 760 server, that supports up to 48 cores.

The new POWER7+ processor based systems offer twice as much memory as their POWER7 predecessors – up to 2 Tb of memory in the new Power 760 model. Most of the Power clients I talk to tend to run out of memory before they run out of processor capacity, so the increase will certainly be appreciated. By the way, the new, higher capacity memory modules will not work in the older “C” model systems, so if you need the additional memory you will need to step up to the new systems.

All these new systems include new POWER7+ reliability features such as a self-healing capability for L3 cache and the ability to restart a processor without restarting the system. These features help avoid unplanned outages and improve the ability to provide concurrent firmware updates to avoid some planned outages.

When coupled with PowerVM enhancements that allows virtual machines to be sized as small as 1/20th of a core, the POWER7+ “D” model systems will support up to twice as many virtual machines (aka LPAR) as their POWER7 based predecessors.

The new systems will be supported by AIX, IBM i, and Linux, except for the Linux-only 7R1, 7R2 and p24L systems. There is a statement of direction for AIX 5.3 support coming in the future for clients that have purchased the AIX 5.3 Service Extension.

If the additional performance and doubled memory wasn’t enough, IBM has priced the 710 and 730 Express servers right on top of their X86 competition–making Power Systems even more attractive to clients that focus on cost of acquisition. 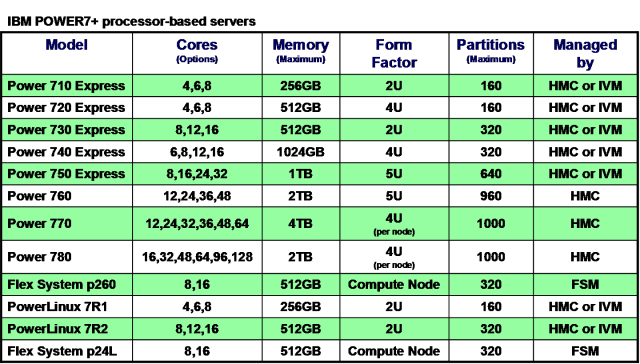 Now things really get interesting with a POWER7+ version of the extremely popular Power 750 Express server. The new “D” model isn’t just a refresh of the old model with POWER7+ chips – it is really a blend of the Express 750 and mid-range Power 770 technologies.

You’ll notice that the new Power 750 Express is in a bigger, 5U form factor. When you see all the new capabilities you’ll know why they needed a bigger box. Like the predecessor 750, the “D” model has 4 sockets with 8 processors per socket for 32 total cores running at 3.5 or 4.0Ghz. The new 750 can be equipped with up to 1Tb of memory and will support up to 640 virtual machines running AIX, IBM i or Linux.

As the TV commercials say: “But wait there’s more”. The Power 750 Express server sports the same kind of I/O you would expect in a Power 770. For starters, it has 6 PCIe Gen 2 slots and 6 disk bays. It also supports four different multifunction I/O cards, that can provide, for example, two 10Gb Converged Network Adapters and two 1/10Gb Ethernet ports.  The Power 750 also includes two GX++ ports, each with 20Gb bandwidth.  Finally, the Power 750 includes a split backplane allowing you to divide up the internal drives between two virtual machines; for example, dual VIOS servers. The Power 750 also comes with three year of maintenance in the purchase price.

With all of these changes, the 32 core Power 750 Express Server will rival the performance of the top of the line 64 core POWER5+ 595 system of a few years ago —at a fraction of the price.

The Power 760 also offers Capacity Upgrade on Demand (CUoD) for processors to provide for even more flexibility.  The CUoD feature allows clients to activate processors to respond to increased workloads without interruption. The CUoD capability is limited to permanent activation only and does not include CUoD for memory.

There are a number of other new products announced today including: POWER7+ updates to the Linux-only PowerLinux 7R1 and 7R2 systems, new I/O including a 16Gb fibre channel adapter. There is also a IBM i 7.1 Technology Refresh 6 (TR6) with lots of enhancements for IBM i and PowerHA SystemMirror for IBM i.  Finally, there is also a new Power Systems version of the PureApplications System for increased performance and workload density.

There’s no new AIX Technology Levels announced today in keeping with the AIX Release Strategy, but there are updates to AIX Solution Edition offerings for Cognos and SPSS.

There is much more detail in the announcement letters that are available on ibm.com/power. A Smarter Computing webcast highlighting the announcements is scheduled for 11 AM EST on Feb 5.

Jay Kruemcke is passionate about helping customers and partners achieve their goals. Jay is a currently a Senior Product Manager at SUSE. Jay is responsible for the SUSE Linux for High-Performance Computing, Linux for Arm, and Linux for Power servers. Jay released the first commercially supported Linux distribution for Arm in 2016. Jay completely restructured SUSE’s HPC offerings in 2017 to add support for Arm systems, provide longer term support, and continue to enhance the HPC Module. The HPC Module provides support for open software such as slurm as part of the SUSE HPC subscription. Jay has built an extensive career in product management based on being a bridge between customers and engineering teams. He has extensive experience in many areas including product positioning, driving future product directions, using social media for client collaboration, and evangelizing the capabilities and future directions of enterprise products. Prior to joining SUSE, Jay had a long career at IBM including many roles in the Power and Cloud Engineering and Offering teams. In addition to his product management experience, Jay has held a variety of technology roles at including product marketing, manager of a technical architecture team, briefing center staff, SAP systems management consultant, and as a system programmer and administrator Jay also volunteers with the Boy Scouts in multiple roles and with ProductCamp Austin. The postings on this site solely reflect the personal views of the author and do not necessarily represent the views, positions, strategies or opinions of my employer. Follow me on twitter @mr_sles and @phastflyer
View all posts by Jay Kruemcke →
This entry was posted in AIX & Power Systems Blogroll. Bookmark the permalink.