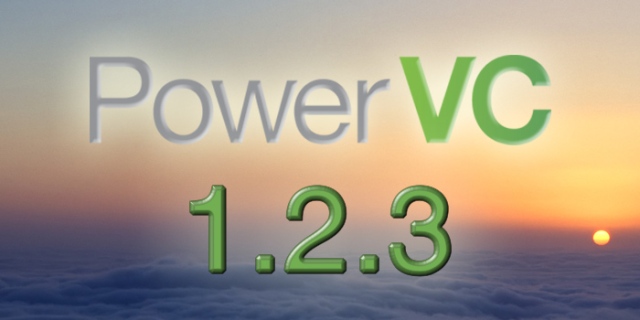 The first PowerVC release in 2015 includes new capabilities for more sophisticated management of enterprise Power environments. It includes new features for managing groups of servers, improved automated placement of virtual machines, enhanced storage support and the capability to restart VMs that were on a failed server.

Based on the “Kilo” OpenStack release, the planned general availability for PowerVC V1.2.3 is June 12, 2015.

The latest version PowerVC has a number of enhancements to give you more flexibility to configure and manage storage.

You can now capture and deploy multiple volumes with PowerVC. For example, you could capture a boot disk, and then deploy the boot disk with data volumes from VM2 and VM3. You can capture boot and data volumes separately and deploy them together. Volumes do not have to reside on the same storage devices and PowerVC can discover and import multiple volumes when importing existing VMs.

You can configure PowerVC to share a storage volume between two virtual machines to support high availability solutions that require shared disks.

PowerVC now supports synchronous mirroring of SAN Volume Controller (SVC) volumes. You must define two storage pools in your SVC environment prior to creation of the new volume. You can use the SVC management console to add mirrors to existing SVC volumes.

You can now add a description to each captured storage volume. Clients used the PowerVC Request for Enhancement tool at https://ibm.biz/PowerVCRFE to request this feature.

The PowerVC 1.2.3 management server now requires Red Hat Enterprise Linux version 7.1. The move from RHEL 6 was required due to the Red Hat lifecycle. The PowerVC management server can run on X86 based systems or on big endian or little endian editions of RHEL 7.1 on Power Systems.

Collections of physical hosts can be grouped together to focus management operations such as deployment on a subset of the hosts managed by PowerVC. Each group can have a unique placement policy like packing or striping. 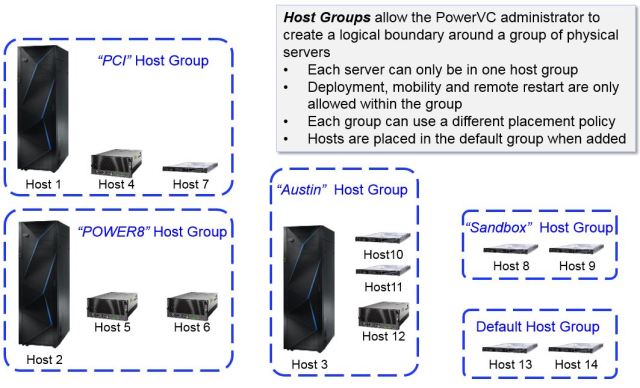 The scheduler component of PowerVC now supports more sophisticated automated placement of VMs during initial placement and during relocation in addition to the “Packing” and “Striping” previously available. The PowerVC scheduler now considers the different amount of processing and memory capacity provided by different models of Power Systems servers.

Using the CPU Balance option places VMs on the physical host with the largest amount of free CPU capacity.

Using the CPU Usage option places VMs on the host with the lowest historical CPU usage. The usage is the average CPU usage measured every minute over the last 15 minutes.

Sometimes you must consider the relationship between virtual machines when deploying or relocating VMs.

VMs with Affinity are deployed to the same physical host. For example, an application server VM and a web front end VM are placed on the same host to minimize communications latency.

VMs with Anti-affinity are deployed to different physical hosts. This eliminates the physical host as a single point of failure for the application. 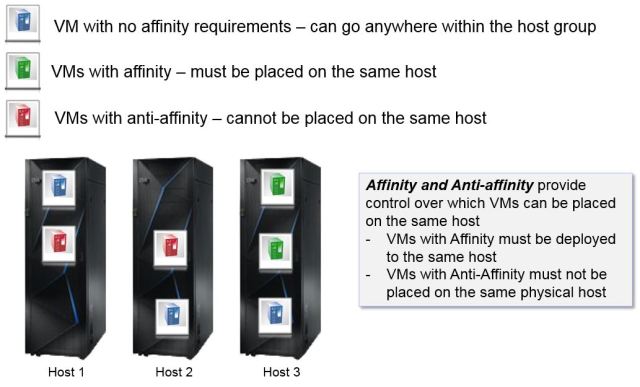 PowerVC worked with the AIX engineering team to deliver cloud-init image activation for AIX VMs. Image activation is the process that automatically runs when a new VM image is deployed to customize the VM instance. For example, you can use it to set the hostname, networking configuration, and SSH keys.

Cloud-init has become the de facto standard for activation in OpenStack. It offers more capability than the VSAE activation engine that previously was the only choice for AIX activation. The AIX team will deliver the cloud-init open source software via the AIX Toolbox for Linux Applications web page at https://ibm.biz/aixtoolboxc

PowerVC V1.2.3 supports the simplified remote restart of VMs on POWER8 processor-based systems. Remote VM Restart allows VMs running on a host which unexpectedly fails to restart on hosts within the host group. The PowerVC administrator must initiate restart of VMs on a failed host. 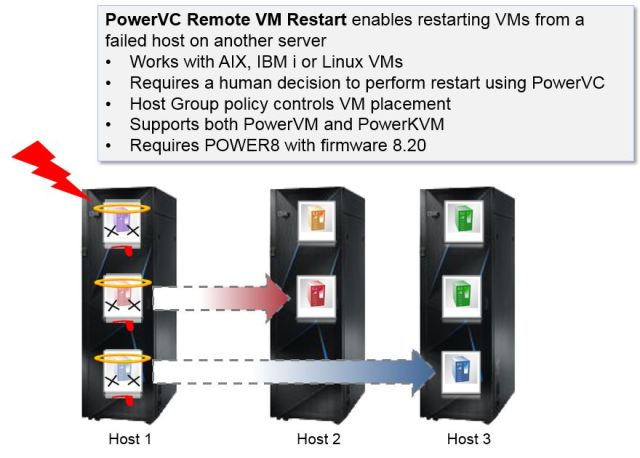 PowerVC Express Edition and PowerVC Base Edition were withdrawn from marketing in April 2015.

These two editions were primarily stepping-stones to PowerVC Standard Edition. PowerVC Express Edition only worked with Integrated Virtualization Manager (IVM) managed systems. PowerVC Base Edition was an early edition of PowerVC that was only available in China.

While both of these editions were important to the evolution of PowerVC Standard Edition, they are not relevant to our core enterprise customers, who use the Hardware Management Console (HMC) or PowerKVM to manage virtualized Power servers.

PowerVC continues to improve the number of hosts and number of virtual machines it can manage.

Link to the official announcement letter

Look for new articles on PowerVC 1.2.3 features in these groups and on our YouTube channel http://ibm.biz/powervcyoutube in the coming weeks.

Jay Kruemcke is passionate about helping customers and partners achieve their goals. Jay is a currently a Senior Product Manager at SUSE. Jay is responsible for the SUSE Linux for High-Performance Computing, Linux for Arm, and Linux for Power servers. Jay released the first commercially supported Linux distribution for Arm in 2016. Jay completely restructured SUSE’s HPC offerings in 2017 to add support for Arm systems, provide longer term support, and continue to enhance the HPC Module. The HPC Module provides support for open software such as slurm as part of the SUSE HPC subscription. Jay has built an extensive career in product management based on being a bridge between customers and engineering teams. He has extensive experience in many areas including product positioning, driving future product directions, using social media for client collaboration, and evangelizing the capabilities and future directions of enterprise products. Prior to joining SUSE, Jay had a long career at IBM including many roles in the Power and Cloud Engineering and Offering teams. In addition to his product management experience, Jay has held a variety of technology roles at including product marketing, manager of a technical architecture team, briefing center staff, SAP systems management consultant, and as a system programmer and administrator Jay also volunteers with the Boy Scouts in multiple roles and with ProductCamp Austin. The postings on this site solely reflect the personal views of the author and do not necessarily represent the views, positions, strategies or opinions of my employer. Follow me on twitter @mr_sles and @phastflyer
View all posts by Jay Kruemcke →
This entry was posted in AIX & Power Systems Blogroll, Cloud, Information Technology and tagged PowerVC PowerSystems CLoud OpenStack, Software Defined Environment. Bookmark the permalink.